More than half of Western Sydney’s population is overweight and at risk of developing type 2 diabetes. The red areas on the map show the odds ratio of having diabetes is 1.5 in the areas including Western Sydney.

This is much higher than the blue areas, which have reduced rates of diabetes. This data was compiled by University of Wollongong researchers Dr Thomas Astell-Burt and Dr Xiaoqi Feng from the 45 years and Up population health study.

One of the key goals of the WSD initiative is to turn the red hot-spots in our region into blue.

An extensive screening program of 4000 residents throughout Western Sydney occurred predominantly within general practice settings, during 2013-15 using the AUSDRISK assessment tool identified that up to 50% of the population were at high risk of developing the disease. This went as high as 100% in some high-risk populations.

This is being driven by weight gain in the population. As the Australian Institute for Health and Welfare (AIWH) has shown, the proportion of Australians with an obese BMI has increased dramatically since 1995 and is above 30% of the population using the most current estimates.

While the pandemic has delayed the AIWH update for obesity estimates, it is likely that this trend has continued in 2020/21.

We know that diabetes is Australia’s largest disease burden, even though 80% of is is preventable. The increased morbidity and mortality are clearly expressed in heart attack, heart failure, strokes, kidney failure, foot amputations, liver disease and blindness. The actual prevalence of diabetes is not known because it is not measured directly. 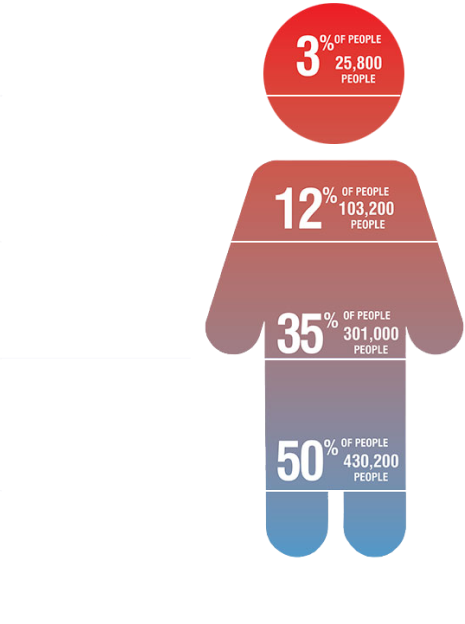 All these groups are strongly represented among western Sydney residents:

Type 2 diabetes is more frequent and has an earlier onset in this population.

41.6% of adults with diabetes reported having medium, high or very high levels of psychological distress.

Experience a range of risk factors that place them at significant risk of developing diabetes compared to the general population.

Women in their childbearing years

The percentage of gestational diabetes in Western Sydney tends to be higher than for NSW, and it also has a high birth rate, with four out of the five local government areas having higher fertility rates than the rest of NSW.